I and Dr. Terry Williams take you on a winter climb up Mt. Glory in Jackson Hole, Wyoming. There was a strong wind and it was 10ºF (-12 deg C) with 20-knot winds on the climb. The snow conditions were solid and there didn’t seem to be much avalanche danger. I show you some of […]

I show you how to choose gloves for cold weather activities like camping, hiking, climbing, and adventuring in winter conditions. This pro glove system has prevented frostbite in extremely cold weather (-40ºF/C). I have used this glove system for 15+ years and it has worked quite well. This system has worked in Antarctica, Denali, Elbrus, […]

The post How to Choose Gloves for Cold Weather Activities System appeared first on Adversity Expert.

Thank you to a channel subscriber for asking for this video! I show you how to choose a set of cross country (XC) skis for long winter expeditions in this video. There are many points to consider when looking for winter cross country skis and this video shows you several important points to think about […]

Decades of history preserved a few cents at a time! Postcards, when combined with period area maps, are invaluable resources. They can reveal the evolution of tourist destinations in a way few books can. Publishers of both postcards and maps are always “in the moment”, supplying the most current information to the traveling masses as they visit parks and tourist destinations around the world. As the years and decades roll along, the once topical information becomes 10¢ “windows into the past”.

Tourists buy postcards for two primary reasons. First, they purchase them, fill them out while on the road, and mail the colorful cards to their friends and relatives. Inscriptions on many postcards include the lines, “Having a great time. Wish you were here!” Second, tourists purchase extra cards to document their own trip. They take them home and store them in a folder, scrapbook, or journal. Those postcards are often unused and beautifully intact. Years later, both genre of cards show up, giving them a second life for nostalgic collectors. The postcards unwittingly document ever so slight changes in the area they represent.

With its majestic mountains as a backdrop, Jackson Hole has always attracted tourists, artists, photographers, and poets. It’s only natural they would want to document their trips, and with that, many publishers catered to them with colorful postcards, books, guides, and pamphlets!

While viewing the various pages, linked below, it might be important to know these dates:

Postcard Pages on this site While many farms and ranches were already active in Jackson, the area at Moose found its legs as the commercial entrance to the Park. A new steel bridge connected the east and west banks of the Snake and the rest is history. This amazing set of images show the towns transition over several decades. Watch for the vintage cars, neon signs, and hodge-podge architecture. NEW: The Chapel of the Transfiguration:

Built in 1925, and still in use, this beautiful Chapel has hosted thousands of tourists, locals, and countless weddings. It’s a bit off the beaten path now, but was very much “on the path” for many of the Park’s early years. Ansel Adams helped make the location famous with is 1942 photo, but it would be many years before the highway made it accessible for the tourists and photographers. Watch the trees grow! This old bridge showed up in postcards from a lot of photographers. It had a storied history, used until the new bridge was built near Moran Junction in 1958. Most tourists used the main road that ran along the base of the Tetons much farther west. This page contains both postcards and historic photos. This a post I created in 2013 containing a cross section of several of the posts above. It features postcards, maps, and a few photos.

There have been countless photographers taking images that would later be used for postcards and literature. These two photographers blazed the trail for all that followed. 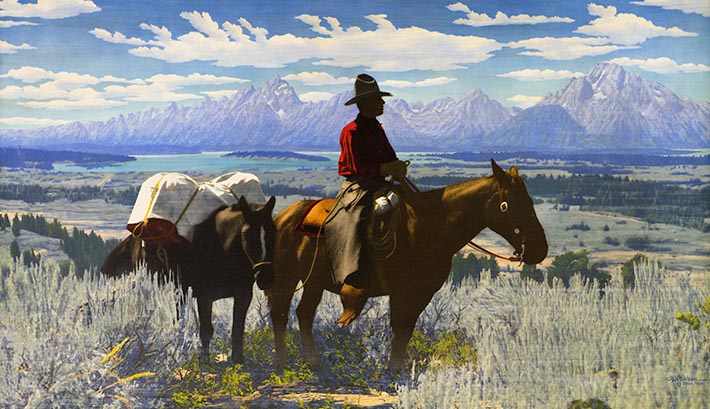 Mr. Crandall was a groundbreaking and influential individual in Jackson Hole. This page only scratches the surface of his life and ventures. You don’t have to look very far to find many vintage postcards, guides, books, and souvenirs with Haynes name on it somewhere.

F.J. Haynes’ page(s) will take considerable time and energy but I am confident it will we worth the wait!

While he spent most of his time in Yellowstone, he ventured to the smaller park south of Yellowstone for some photos.

This is the new HOME PAGE for the Post Cards. I need to get back to work for now, but plan on adding quite a few more postcard pages, such as Mountain Lakes and Streams. Check back! MJ